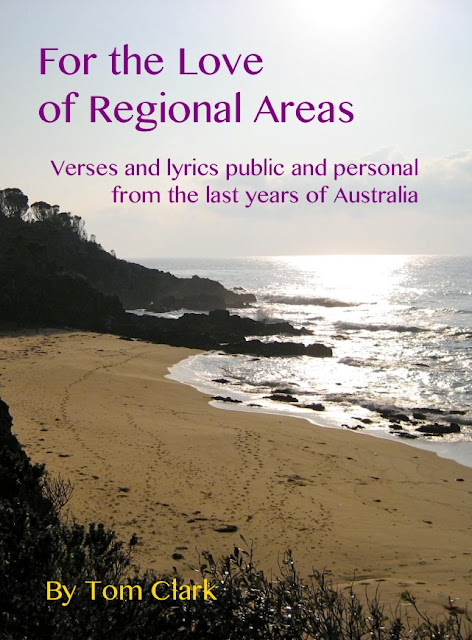 Acknowledgments
Prelude to the Departure
1. A last golden age
2. Something worth fighting for
3. The beginnings of the end
Posted by Tom Clark at 14:33 No comments:

This collection of poems appears in tandem with an e-book version of the same lyrics and verses. The e-book is available on Smashwords and can be found at: http://www.smashwords.com/books/view/144367.

I freely concede that it might seem like a rather somber piece of work: a focus on that inevitable moment when Australia became no more. It is hard for Australians to imagine that inevitability, let alone accept it. But rather than wallow in the desolation of Girtie, ’Straya, a sunburned country, this collection explores the memories of an Australia once ours, of the lives we led, and of that Australianness we carry with us, even when we can no longer live in an Australia.

The cover image draws from a photograph that Sara Holquist took. It is also the subject of one of the poems.

Some of the poems in this collection have previously been published through: Cordite, Eureka Street, Honi Soit, the Melbourne 2020 program published by Ash Keating, Overland, and Platform.  In republishing them here, I want to acknowledge the support of each of these publications.

I also want to acknowledge the support of my employer, Victoria University (Melbourne).  VU treats creative work by its staff as of a piece with our research output, making it an extremely conducive environment in which to write and publish.  Colleagues in the School of Communication and the Arts have been unfailingly supportive and encouraging.

This collection is specifically indebted to the creative input of friends Ben Cornford and Vanessa Kirkpatrick, who kindly reviewed it for me before publishing, as well as my mother Alison Clark, who has read and responded to the poems as they developed over fifteen years.  I owe a particular debt to my VU colleague Sasha Henriss-Anderssen, who has helped me arrange the manuscript for publication.

Chief among the latter group is my wife (not alleging anything proprietary by that pronoun). I dedicate this collection to Becky Batagol — with all my love and hopes for our future!
Posted by Tom Clark at 14:31 No comments:

Prelude to the Departure

Sushila Ahwong’s Australia Day Proclamation, which she read on the landing at Admiralty House, Sydney, is widely acknowledged as the first key milestone event in impacting the Departure that followed.

As you may be aware
our Elders have been meeting in a council this month
meeting to ensure
on this matter of the greatest significance to all of us
that every opinion and point of view among us gets its fair
hearing.

The Elders have asked me to deliver this statement to you on
their behalf.

Settlers came to these lands uninvited.
That is understandable.
Often a guest comes uninvited
and yet we welcome the guest who we did not need to ask for
a visit.
The settlers stayed in this country uninvited
and without discussing terms with us
or with the lands we keep.
You made up lies like terra nullius
some of which you have retracted since
but you settlers never settled terms with us.

Now the harm is too great.
Now we know that there is no prospect of settlement with the
settlers.
Now we know
rebuking you is not enough

One thing you taught we shall forever thank you for:
you taught us to come together
– many of us, over many miles –
to discuss together how to respond collectively to you.
That has been good for us and for our lands.
It will be remembered as a credit to your influence.

We decided something you will not understand at first
but then you will understand.

We decided that you must go.

All non-Indigenous persons in these lands must leave them.
This will be expensive
and you may have to look to your government to assist you
but go you must.

Since 1788
you have been as guests awaiting the invitation to stay.
Many of us assumed all along
as you did
that the invitation would be forthcoming in due course.
Now we have agreed otherwise:
it will not be.

These are our terms:
you have one year to leave
each of you
to tie up your affairs and get out of our lands.
We shall do our best to negotiate with your government
but in a year and a day
we shall hold you each responsible to be out of this place.

For one more year we shall remain generous and civil to you
because we know you are leaving.

Thank you for your kind attention.

The wolf
they would not turf out
for the order and balance
of things, whilst still they
wielded law, was very soon
loose and rampant among
whooping giants ran,
devouring trade unions
and gods alike, in disregard
of sanctuary.

The sunset is a grief for us,
a crying without release.  We watch
the goldengrey cool waves roll
and see in them those others who’ve been
here with us.

Oh, my father!  What a longing
is at the fishing rock where we
scattered your ashes once.  Quiet, though,
your mother’s old kitchen.  These cliffs have seen
so many tides come and go.

Oh, grandfather!  This ocean
will sing your name when people
have long since ceased to fear
your furrowed brow, your flashing pride,
your knowledge of their past.

The paths that link our houses
tell of histories without number.
Each corner, each tree, each anthill is
what we’ve learned at her knee,
the saltwind teacher.

My lineage holds me close here:
can you feel it?  It brings me
a wealth of tears each time I catch
the late sun glistening on that
restless old sea.